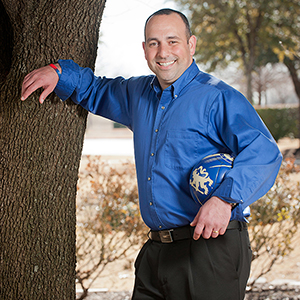 For most folks, the prevailing perception of strokes is that they are “something that happens to older people.” Not so. Just ask McKinney resident, Michael Khoury, who at the youthful age of 34, experienced a stroke firsthand.

“The weird ‘fluke’ thing about it is nobody in my family had ever experienced anything like that before,” says the Boyd High School psychology/sociology teacher and soccer coach. “I’m told the average age for a stroke is 67. This is why it’s so important for people to understand it can happen to anyone and to become familiar with the symptoms of a stroke.”

Up until the very moment Khoury’s stroke ‘struck,’ the day (January 18, 2011) was much like any other. “I was at the school preparing for a game and talking to a fellow coach,” he says. “I was in mid-sentence when something suddenly happened -- I just couldn’t get the words out. Then I saw my hand drop in surreal slow motion, as it was disconnecting from my central nervous system. Luckily, my right leg was still functioning – albeit, not fully – so I was able to stumble onto a table to lie down. The funny thing is there was absolutely no pain. I guess that’s the point, right? Sometimes you don’t feel anything when you are having a stroke.”

Initial feelings Khoury does remember were confusion and embarrassment. “It happened where many kids could see me and I hated that feeling of helplessness,” he says. “I just didn’t want to be the guy in that position. I wasn’t panicking because I didn’t know what was happening to me; thank God those around me did.”

An ambulance arrived and quickly transported Khoury to the Emergency Department at Medical City McKinney (MCM). “I have so many people to thank: My friends at the school because they called 911 immediately; the paramedics who did a great job of getting me safely and quickly to where I needed to be; and, of course, the Emergency Department team at MCM who wasted no time in evaluating and treating me,” Khoury says.

Despite the countless patients Cassidi Roberts, R.N., Emergency Room Director at MCM, has seen during her 12-year career as an E.R. nurse, she says the memory of when Khoury came to MCM’s E.R. remains surprisingly vivid. “On that day when I received the EMS report activating a ‘code stroke’ for a 34-year-old man who was having difficulty speaking and moving his right arm and leg, I questioned whether this could be the ‘real deal,” she says. “However, the moment he was rolled in the door, I knew we had to act fast and get this young man treatment right away.”

Mike Mixon, R.N. and MCM Trauma and Stroke Coordinator, also clearly recalls three years ago when Khoury came to the E.R. “He couldn’t write anything because he is not left-handed, so the only way we were able to communicate with him was by telling him to blink one time for this or two times for that,” he says.

The first form of treatment MCM’s emergency team immediately administered to Khoury was tissue plasminogen activator, more commonly known as tPA. Widely considered the Gold Standard, tPA is the only FDA-approved treatment for ischemic strokes. It works by dissolving the clot and improving blood flow to the part of the brain being deprived of blood flow.

“I believe tPA is the main reason Michael was able to recover as well as he did,” Mixon says. “I remember telling him ‘You’re going to make it through this and we’ll be right here with you.’ Thank God Michael was brought to a certified Primary Stroke Center such as MCM where we were able to quickly evaluate and treat him.”

While there’s no question Khoury has made great strides in reclaiming his former life, he is the first to admit struggles remain. “Immediately following the stroke, I could not make a single sound. I remember trying so hard and finally being able to say my wife’s name, Mayu,” he says. “I’ve continued to work really hard and to talk as much as possible. I still speak slowly, and sometimes after a day of teaching, my mouth muscles are really sore since it is a constant effort to talk fast enough to maintain the kids’ attention.”

Despite the challenges Khoury has faced during the past three years, he remains an optimistic and happy person. Since the stroke, he has also achieved a number of significant life goals including: Completed a master’s degree from the University of North Texas in Denton; helped coach a soccer team to the regional finals; purchased a home; and – above all – he and his wife welcomed their first child, daughter Liv, in January 2013.

“Looking back, I understand other people who have experienced strokes have repercussions much more severe than mine. I realize how lucky I am and that I was definitely at the right place at the right time,” Khoury says. “I want to take this opportunity to say ‘thanks’ to everyone in the ER at MCM for being there for me. They were all so professional and skilled at what they do. Equally as important, they showed me and my family nothing but kindness and patience.”

You can also find more about this story in McKinney's Healthy Living.

Signs and symptoms of stroke:

If you notice any signs or symptoms of a stroke, call 911 immediately. Remember, every minute – every second – counts in the event of a stroke.